When my son was about five years old, an older child in the school van asked him if he was Muslim or Hindu. He didn’t know. So he told her, “I’m a Gemini”! When he got home he anxiously asked me if his reply was right. I nodded and smiled, all the while wondering how to explain religion to a five-year-old.

He had a lot of questions.

What is a Hindu? What is the difference between Hindus and other people? How many Gods are there? Why are there beggars with no food to eat and no place to live – why does God let it happen? Where did Ajja go when he died? Why do I have to be good? And so forth.

I thought back to my own childhood. When I was four I lived with my grandmother and her mother for about a year. That’s when I think I imbibed something about Hinduism. I say ‘imbibed’ because not much was spoken; it was just lived. There are only two things I remember being mentioned. One was karma, or ‘you reap what you sow’, and the other was that there’s only one God whom people call by different names. I realize that these two beliefs have endured, and I still believe them to be true. So, when I decided to write down what I meant to tell my son about Hinduism, I started with these two concepts. That’s what ‘A Little Book for the Hindu Child’, published in 2005, is mostly about.

‘A Little Book for the Hindu Child’ has been available only in Bangalore all these years. Earlier this month Raj, whom I’ve known for several years now, converted it into an e-book and made it available on Amazon. I hope his efforts bear fruit, and people everywhere read this book and find it useful to understand the basics of Hinduism. 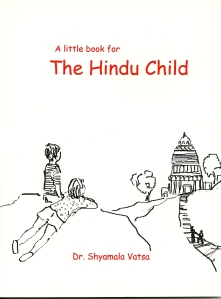 A Little Book for the Hindu Child is available on Amazon too.

When my son was about five years old, an older child in the school van asked him if he was a Muslim or a Hindu. As he had never heard either word before he told her, “I’m a Gemini”! Anyway, that was the beginning of his questions to me.

What is a Hindu? What is the difference between Hindus and other people? How many Gods are there? Why are some people so poor? Where did Grandpa go when he died?

I looked in every bookstore for books that could simplify Hindu concepts for him. This was in the late nineties, when we depended on bookstores, not on the internet. I couldn’t find any. Finally I decided to put down on paper what I had imbibed about Hinduism over the years. Those jottings gradually grew into a book, and illustrated and edited by friends who believed in it, reached stores in early 2005. 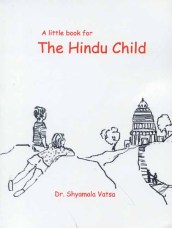 ‘A little book for The Hindu Child’ by Bangalore-based psychiatrist Shyamala Vatsa is an interesting introduction to Hinduism. The book, primarily meant for children and early teens, is equally fascinating to adults because of the way the author has dealt with the content. Her address is straight and her answers to certain very profound questions, to the point and without any dogma.

In the first chapter ‘What is religion?’ she begins by usual questions like “Who am I?”, “Why was I born?”, “What is God?” and turns to the readers for the answers. “Who can answer these questions? Only you.” The baseline – ‘Find out for yourself’ does wonders and is the essence of Hinduism.

Dr Vatsa’s approach to the subject is good. Keeping in mind the vulnerability of the age group she has addressed, she has kept away from pedagogy and preaching. Instead, she has, at some places, used classroom lessons to clear doubts on intense questions like the existence of God, meaning and relevance of education, goals in life, etc. and at some, she has used life as a great learning experience to address similar serious queries. She has very simply and interestingly connected the basic principles of Hinduism like the four ashrams or stages in life to everyday life. Brahmacharya, Grahastya, Vanaprastha and Sanyas come out of the dry pages of scriptures and become alive in a young mind.

Nowhere has she sounded absolute and final in her effort to make her readers understand the subject, and this, I feel, is a remarkable achievement. For instance, when she talks about education, she says, learning something is actually ‘discovering’ something that is already in one’s mind.

Her definition of right and wrong is equally commendable. ‘Whether a thing is right or wrong depends on why you are doing it. So you have to be clear about your reasons for whatever you do,’ is quite profound. She has explained Karma – one of the underlying principles of Hindu philosophy and at the end, says, “Maybe you don’t believe in Karma or re-birth. Then what do you believe in? Try to argue it out in your mind till you are satisfied.”

It’s a reaffirmation of her remarks towards the end of the book. “Hinduism is a way of thinking and one of the ways to find out these answers.”

Some children spontaneously remember their past lives, usually between the ages of two and four years. Carol Bowman, a housewife, experienced this with her own children. Her consequent interest in the subject led her to interview other people in similar situations. Her findings are recorded in a book called ‘Children’s Past Lives’.

The stage of life from ages seven through eleven is called the Latency Period. During this time children are extremely curious about everything. In his book ‘The Spiritual Life of Children’ Dr. Robert Coles, Professor of Psychiatry at Harvard, writes about the moral intelligence of children. He says that the conscience, which is already present by then, develops further as the child begins to raise questions about ethical issues.

The story ‘Invisible Patterns’ is about Harsh, a 10-year-old boy who remembers a past life and talks to his parents about it. Despite a belief in rebirth as a theory they are baffled by their son’s experience when actually faced with it. Nevertheless, they encourage him to figure things out for himself. By and by, Harsh begins to notice the invisible patterns that run through the universe as he deals with the ethical dilemmas he comes across in the course of his school life.

Reincarnation has always been a widely-held belief in India. There are often reports in the press of people claiming to remember past lives. Dr. Ian Stevenson, a psychiatrist, followed up about 3000 such cases over 40 years, flying to different countries to meet and interview them. In India Dr.Satwant Pasricha, former Professor of Psychology at NIMHANS, Bangalore, is known for her research in this field. There are also people like Dr. Brian Weiss, author of several books on the subject, who practice past-life regression, offering somewhat indirect proof that rebirth happens.

A child who can think for himself will use his own moral compass to tell good from bad.

We, as parents, need to encourage independent thinking rather than monitor our children.

The aim of this story is to get a child to listen to his inner voice and use his own judgement in making choices.