It was lovely being back on a nice big ship again after sixteen years.

My husband’s a captain on a VLCC, or very large crude carrier. It measures 330m x 60m. That’s thrice the length of a 100m sprint track and maybe as big as one of those islands that mysteriously spring up in the South China Sea overnight! 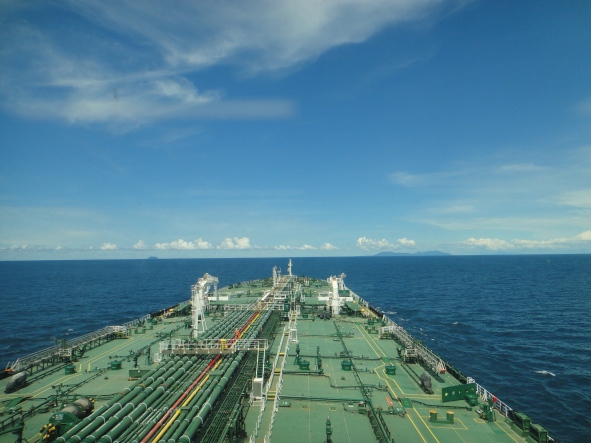 Here are pictures of the anchor chain, and the spare anchor stored on the main deck. The accommodation is about 200m in the distance.

I had no access to WordPress during my month-long stay aboard. But, seriously, I had nothing to write about because I mostly write when I’m riled up. I read, watched movies and enjoyed the company of the other people on board. The food was great and the best part is that I didn’t have to cook it myself!

The deck officers and engineers were from different countries and the crew, including kitchen staff, was Filipino. Diversity of this sort makes for interesting conversations. I love how my mind stops being preoccupied with my usual worries and frees up space for all the new information that is invariably shared, mostly at the dinner table, when everyone gathers together after work.

Igor, the chief mate, is from Dubrovnik in Croatia. Apart from the well-known collective headache caused to the people of Dubrovnik by tourists after GoT was shot there, life in his city is good. The Croatians I sailed with in 1990 had been a worried lot as Yugoslavia was in the middle of a bloody civil war at the time and was breaking up into many small states, one of them being Croatia. Igor happily told me all about his wife, kids, parents – and even in-laws! – and I got to see snaps of all of them. What a lovely, doting husband and father, and what an adorable pair of tiny twin girls!

Ante, the third mate, is from Split, Croatia. He was reserved, but as we were often the only two people having lunch in the saloon at noon he would talk to me. He told me he had worked on cruise ships before switching to tankers. Really? Did he have to talk to passengers? He answered in his characteristic grumpy style, in that European accent that sounds so innocent and childlike: “Buth I usually avoidh them. They ask the sa-ame sthoopid questions, in the sa-ame ordher – ‘whath is your name, how long you sailing, where you from…’” His brilliant blue eyes filled with disgust at the mere memory of it. “Here I don’th have to thalk to anyone!” But as he continued to talk about Split and his life there whenever we were at the lunch table together – and even smiled occasionally – I guess ‘anyone’ didn’t include me.

Living in India where the population only goes up and up, I was surprised when Samuel, the second engineer, told us that the population of his country, Bulgaria, is falling! From nine million in 1985, to seven million now. Why? Because of the economic collapse after the fall of communism in 1989, and because of Bulgaria joining the EU in 2007. So where did two million Bulgarians go? To Germany, along with two million Romanians! If Germany accommodated them, plus all the refugees it’s been taking in, maybe Lady Liberty should be relocated to Germany from New York, especially with Trump’s new policies!

Dinner table conversations with Samuel and the Egyptian chief engineer, Tareq, were fun actually. I miss them. Samuel’s wide-ranging topics – from Baba Vanga and Akashic records, to movies and documentaries, to recent research in tech for studying the mind – were always engaging. Since Tareq’s communication style didn’t allow for nuance, he made some pretty interesting, but jaw-dropping, statements! Really, the way different people express things can leave you totally surprised. The electrical engineer, Kris, who is from Poland, was once telling a group of us about some scientific work on black holes. He got frustrated because he couldn’t get the name of the scientist, went bright pink with the effort, finally slouched in his chair, bent his neck to one side and proclaimed, “That guy!” Of course, it was obvious that no disrespect to Stephen Hawking was intended.

I spent forty minutes every evening with the deck cadet, Llorenç, to add a little to my meagre knowledge of Spanish. Llorenç is from Mallorca and speaks Catalan and Spanish. We wrote out conversations for translation around our own experiences. I wanted to learn to say things in preterite tense as I had only done lessons in present continuous when I attempted to learn Spanish before. This way, I could talk about things that have already happened in my long life rather than simply give a commentary in present continuous! 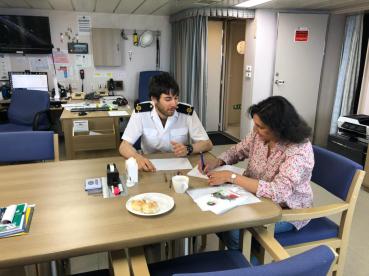 Before I met LIorenç I knew nothing about Mallorca except that it’s a tourist destination and that Rafael Nadal is from there. Now I feel as though I’ve spent a few days with Llorenç and his girlfriend on their island, visited their new apartment, and seen all his favourite haunts. Mallorca is now a place that I think of warmly; it’s no longer just a smudge on a map.

I loved being a part of this little community. It was like a family. Most nights, especially moonlit nights, I used to look out of the porthole in my cabin and feel very peaceful as the ship quietly sailed along the course set for her. I knew that our conscientious young second mate, Daniel, had carefully set the course, and it had been double-checked by the captain. I knew that Ante, Daniel and Igor, during their watches, would be monitoring the radars and other instruments carefully up on the bridge through the night. I felt safe ensconced in my bunk, with the ship rocking ever so slightly. There was the slightest vibration from her engine – a comforting sensation – as she made her slow progress out of the Gulf, crossed the Arabian Sea, the Indian Ocean, the Bay of Bengal, squeezed through the traffic of the Singapore straits, then sailed up north through the South China sea, to finally reach Ulsan in South Korea over twenty days.

I loved the clarity of knowing that the ship had only one thing to do: transport tonnes of crude oil from Kuwait to Korea. Everyone worked towards this one goal in a perfectly coordinated operation.

When we neared Ulsan the pilot came in a pilot boat and the crew lowered the pilot ladder for him. He climbed on to the deck and went up to the bridge to guide the ship towards the SBM (single buoy mooring). The engineers down in the engine room monitored the main engine as per the commands given from the bridge control.

Then, two tugs made sure the ship wouldn’t ride up on to the buoy. Around then, the loading master arrived on a boat from the port.

The chief mate and his crew set up the equipment for cargo transfer on the main deck, the loading master coordinated between the ship and the shore, the deck officers took turns at manning the Cargo Control Room, and the entire operation was smoothly completed over several hours.

We had a chance to go ashore by boat at Ulsan port. The ship chandler, Mr. Bak, who supplies our ship provisions, took us around in his car.

We got to see a bit of Ulsan and try Korean food.

As we were driving down a city road Mr. Bak reverently pointed to a wall that seemed to go on for ever: “Hyundai factory.” A bit further, another never-ending wall: “Hyundai port.” Eighty percent of the cars on the road were Hyundai, including the one we were riding in.

Ulsan was preparing for Buddha’s birth anniversary on 18th May. Buddhist temples were decorated for the occasion.

Just a thought as I end this nostalgia trip: One of the sentences I had written out for my Spanish class with Llorenç was ‘I couldn’t bear to get rid of it (my old moped).’ He translated it as me sabía mal tirarla. I asked why me sabía mal, not me senti mal. He thought for a moment, then placed a fist over his tummy and said, “No… it’s like… bad food…” I thought about it. There are things you feel in your gut, and not through your senses, so you can’t use sentir, I suppose.

Me sabía mal. This is how I felt when I walked down the gangway for the last time. As I sat down in the boat that would take me ashore to catch a flight back home, I looked out at the ship that had been my home for a month, until it disappeared from view.

Shippees maintain that friendships on ships are only up to the gangway. True. They can only rarely sustain friendships that are forged over three or four months of working together. But I will treasure the delicate threads of memory of the time spent with these guys. They are bits of colourful weft woven through the largely neutral (beige? teal? mauve?) warp of my life. For this one month, they were family, and I’ll feel the warm glow of the camaraderie I shared with them, whenever I think of them.

8 thoughts on “a short voyage”