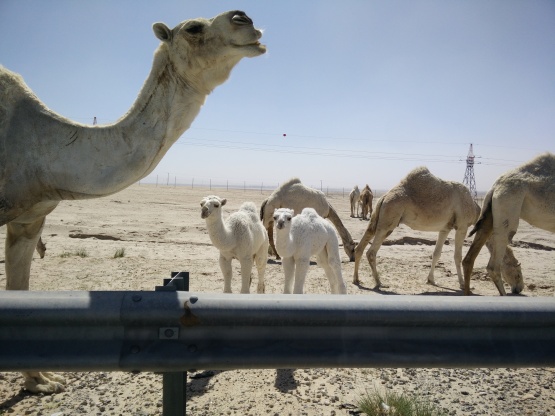 I’ve been here for nearly six weeks now and it’s starting to feel like home. Actually, Kuwait City is a lot like how Bangalore used to be. Bangalore of the seventies, the city where I wish I could live more than anywhere else in the world. Paradise lost, to borrow a phrase from Milton.

Present-day Bangalore is constantly worrying about water from the Cauvery river running out, and of having to share it with Tamil Nadu. There’s plenty of water here in Kuwait City.

There are fountains dotting the city like in the Bangalore of my childhood. Not a single river flows through this desert land, but the government has set up desalination plants for citizens to get a plentiful supply. 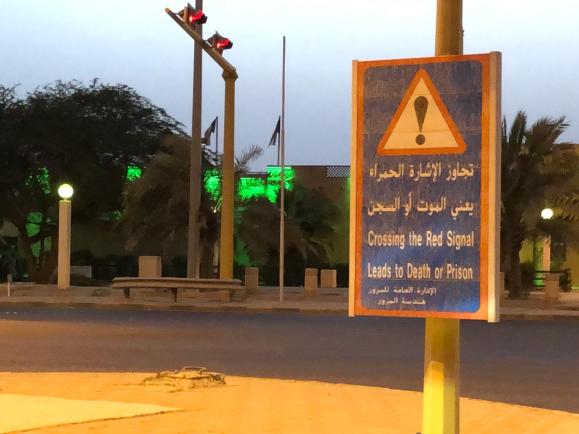 There’s plenty of space to drive on city roads. No potholes. No jams. People don’t dare run a red light. And the best part is that there’s ample free parking everywhere, the way it used to be in Bangalore. 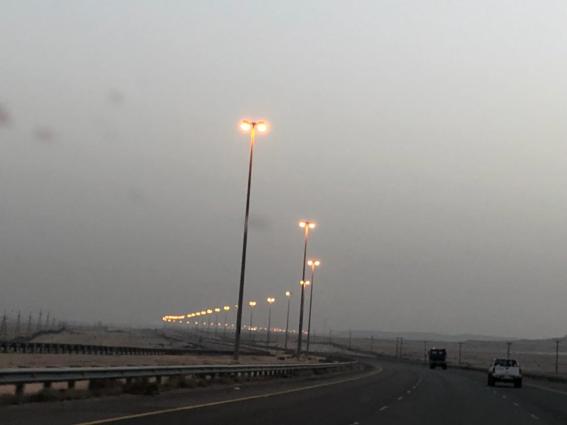 My husband and I go for long drives out of the city after dinner and on weekends. Going for a drive after dinner was very much a Bangalore thing to do in the seventies and eighties. The drives here have a magical quality for me, mixed as they are with nostalgia for a way of life that has been gradually stolen from me by Bangalore’s transformation into what is called an IT hub. Those days, no matter which route you took out of town to the open spaces on the outskirts of Bangalore, traffic flowed smoothly and the air smelt fresh. 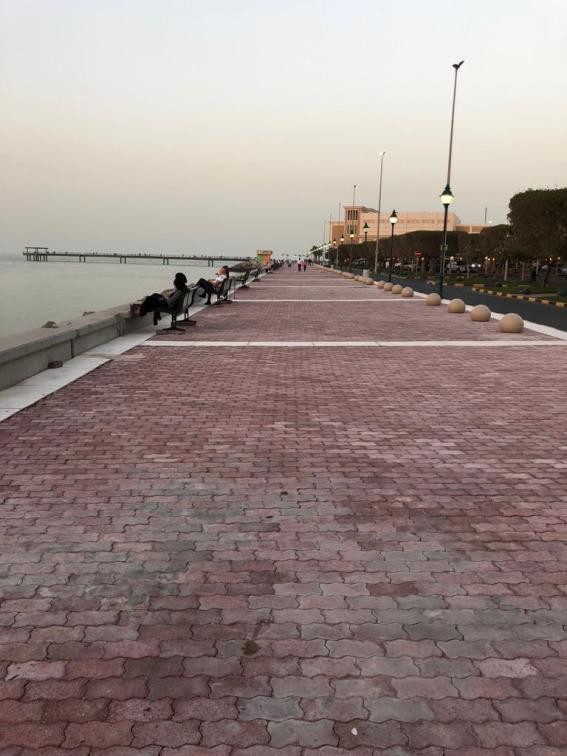 We walk a lot because it’s something we love to do, but can’t do in Bangalore any more. The sidewalks are wide, with no missing slabs or uneven bits to trip you up. And well-lit too, if you want to continue walking after dark. 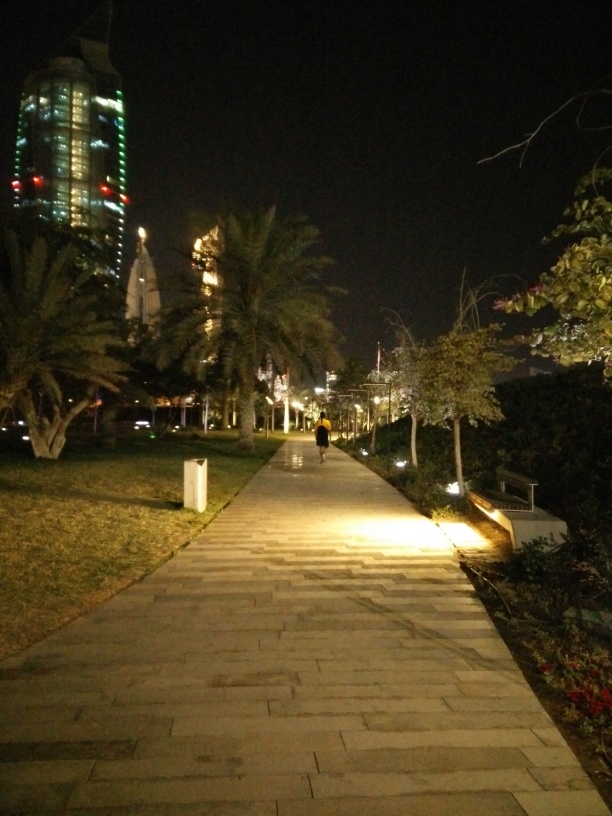 And no jostling crowds. Again, reminds me of home in the seventies, when I walked to friends’ houses, hobby classes, movie halls — just about everywhere.

I feel bad to say this, but I can’t help thinking of all that I encounter on a morning walk in Bangalore now: construction debris, thick black wires (snaking across the sidewalk, wrapped around trees and lampposts as ugly eyesores, or dangling from trees), packs of snarling stray dogs, garbage heaps, missing slabs, transformer enclosures. . . During peak hours people ride motorcycles on sidewalks to get past jams, so there is an added risk. Walking through a city should not be a dangerous obstacle course. 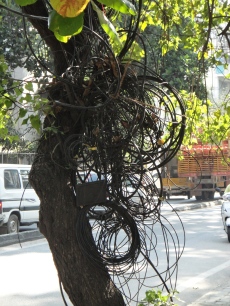 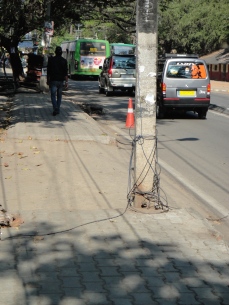 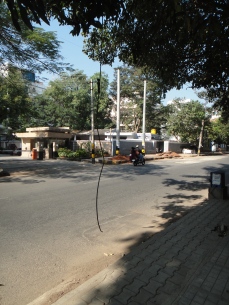 I don’t smell air pollution while walking here in the city. Undoubtedly, there is some from vehicular exhaust, but it doesn’t envelop and assault me like a living thing, the way it does in Bangalore. There is no smog, and visibility is therefore great. 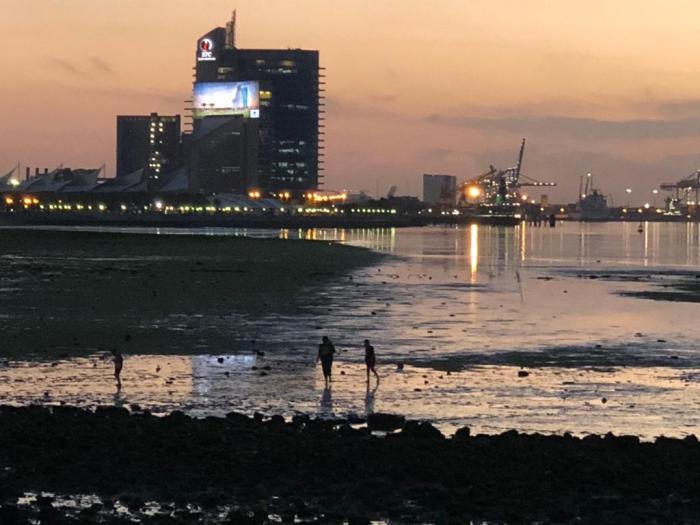 I understand that there are no polluting industries here as everything is imported, and the population is a fraction of Bangalore’s, but that doesn’t justify the kind of pollution we are exposed to in Bangalore. And there is practically no noise pollution here as people don’t toot their horns unnecessarily. 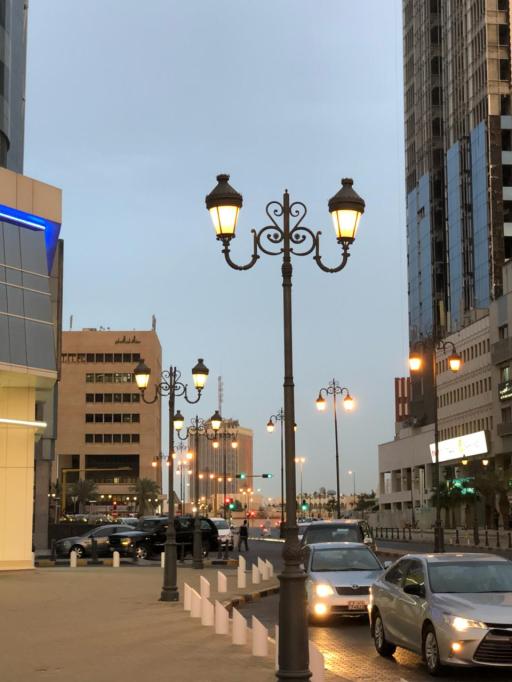 Visual pollution by way of hoardings, and wires crisscrossing the sky giving Bangalore the appearance of a giant spider web (pic below), are both absent here. The street lamps therefore look beautiful (pic above), untethered to masses of black wire as they are back home (pic below). 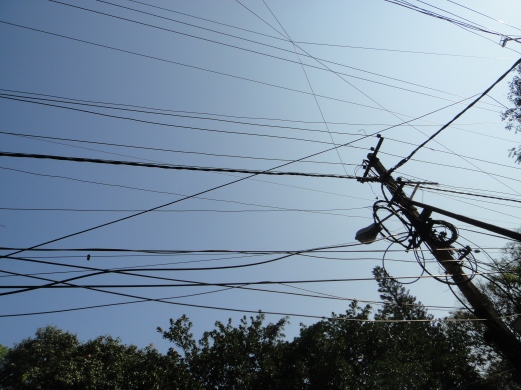 There’s no dearth of electricity here. Streets and buildings are well-illuminated.

I am aware that a lot of fossil fuel is being burned to generate all this electricity, going by the armies of pylons and unending lines of electric cables I’ve seen on the outskirts and along highways. 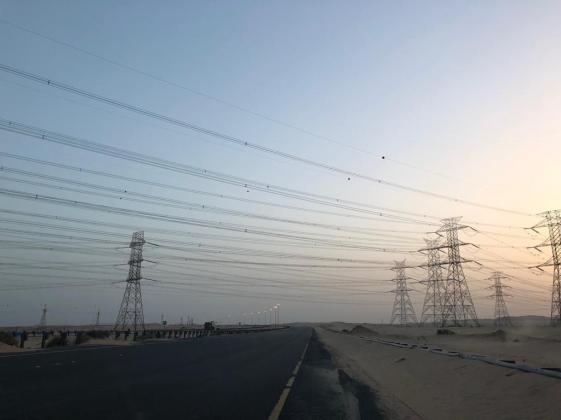 This troubles me as an earth citizen and I do wish they would think of ways to minimize wastage of electricity and fuel. But the point to note here is that the government spends its petro-dinars to give citizens basic comforts like bijli-sadak-paani (electricity-roads-water), as we say in India, and clean, safe public spaces with well-kept lawns and walkways.

There is one thing about Kuwait that I wish would change: overuse of plastic. It happens in Bangalore too, but here it is much worse. Every vegetable you buy is bagged in one thin plastic bag, then all your items are put into big, thicker plastic bags at the checkout counter. Yesterday, the bill for my grocery shopping was only 14 KD, but I came home with eight big, thick plastic bags and eleven thin ones! One big bag held just one bottle of cooking oil and another only a bottle of salad dressing and a small can of baked beans! The clerks at the checkout counter look surprised when I try to fit my shopping into fewer bags and I have to go along with them because of the language barrier. 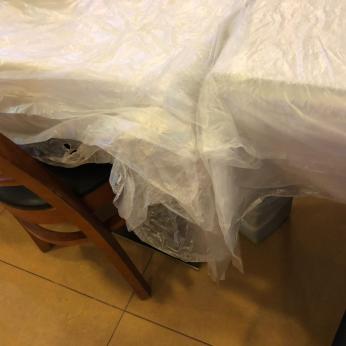 In restaurants, layers of thin plastic sheets are spread on the table. When the table is cleared after a meal leftovers are dumped on the topmost sheet and it is rolled into a bundle and tossed into a bin. So it’s mixed waste. In some restaurants I do see waiters separate food waste from plastic, though. There is a garbage disposal problem here, too, just like in Bangalore, but it is not as visible as it is in Bangalore.

Some people are aware of this, going by an exhibit I saw at the museum at Al Shaheed park, though  the message hasn’t percolated down to the man on the street yet. 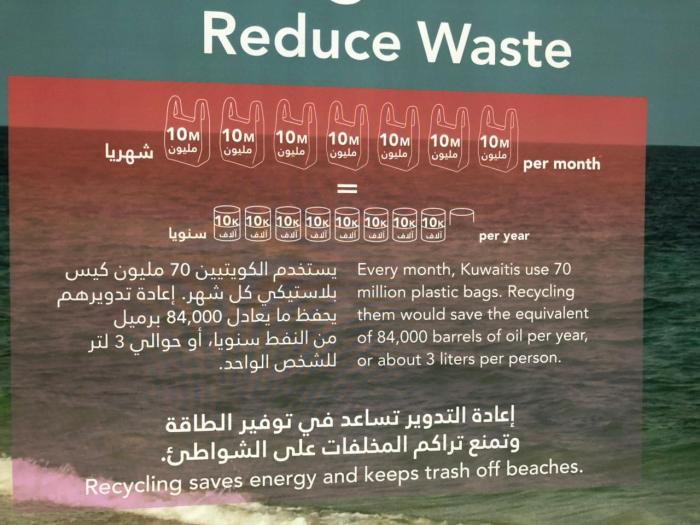 As I said in an earlier post, nothing grows here without effort except date palms. Petunias were planted timed to bloom during Liberation Day weekend, and they did. All over the city. 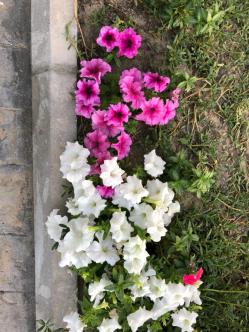 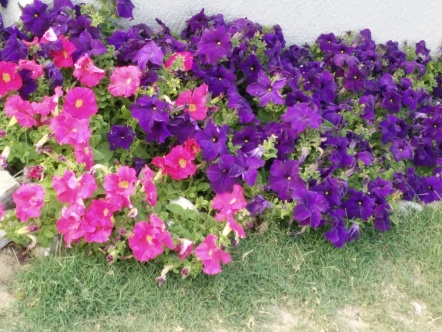 Geraniums and Oleanders are in bloom now, all carefully irrigated. 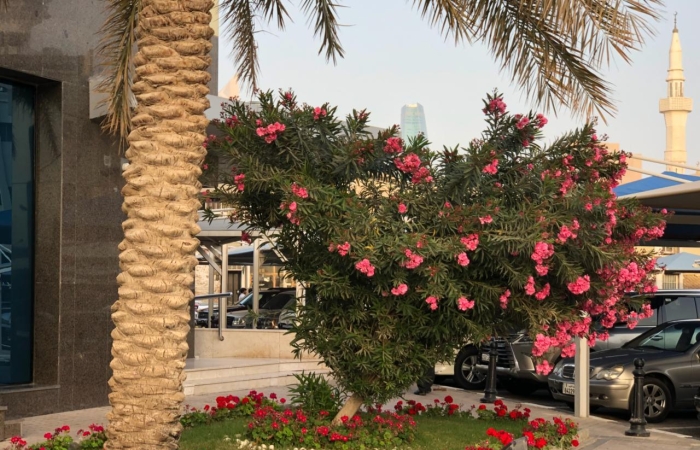 At Al Shaheed park there is such an effort to coax Bauhinia trees to produce flowers (pic below), whereas we in Bangalore can drop a seed anywhere on our fertile soil and have it sprout a healthy little shoot and grow into a tree in no time, with practically no tending. 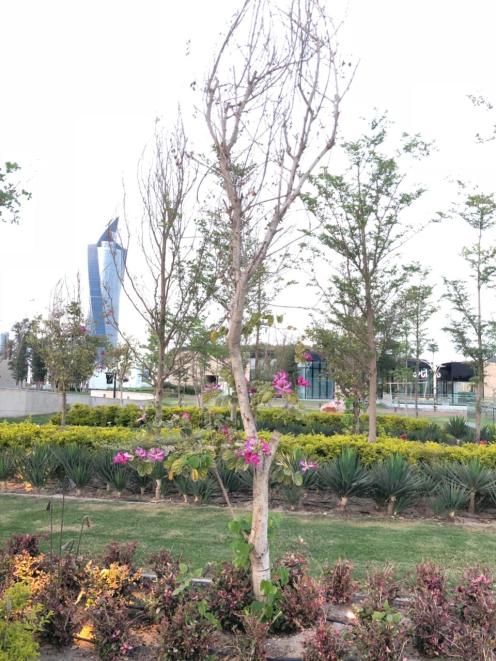 But what do we do? We chop off fully grown trees to make way for flyovers of highly doubtful utility.

There’s one important principle that I feel the Kuwaitis have understood and adopted: maintenance. Erecting buildings, putting up fancy lights and water features is all very well, but what a wasted effort if most of the light bulbs don’t work and the paint job develops patches after one monsoon, and the water feature becomes a cesspool for mosquitoes to breed. This is what happens in Bangalore. Nothing appears neglected here, at least in the downtown area where I stay.

However, there’s one thing Bangalore and Kuwait City have in common at present: a dedicated band of Harley-Davidson worshippers! 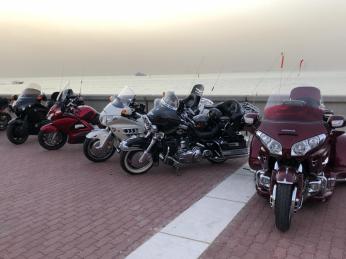 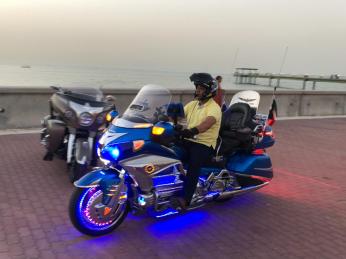 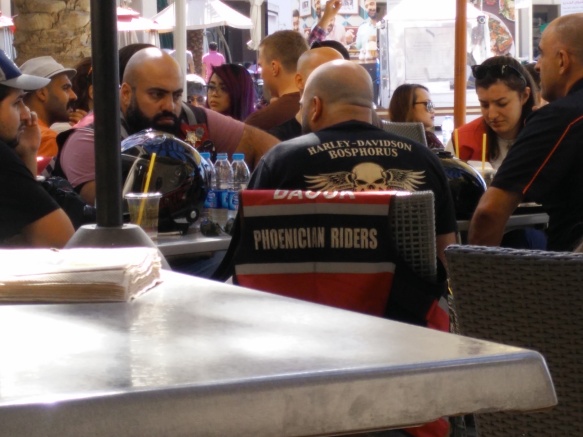 I hope Kuwait City continues to stay this way and I can keep coming here for a break whenever Bangalore feels too claustrophobic. This city doesn’t seem in danger of being turned into an IT hub, so it’s safe from the sort of ruinous growth that the government in Bangalore considers progress and development.