I keep coming across this statistic in the media: India has only 0.75 psychiatrists per 100,000 people. This is apparently the reason for countrywide neglect of mental health.

How can that be? We are talking about mental health here, not mental illness. Psychiatrists are medical doctors who treat individual patients suffering from mental illness, while other agencies are responsible for the mental health of populations. Substandard education, nutrition, housing and healthcare systems, unemployment, corruption, inadequate infrastructure and safety, disillusionment due to chronic mismanagement by successive governments, coupled with unattainable aspirations ­­– these are responsible for compromised mental health.

Let me put it another way. Physicians treat cancer, infectious diseases, metabolic diseases like diabetes, etc., but as an interdependent society, we are responsible for causing many of these diseases. Some examples:

Doctors can only do damage control, one patient at a time, and are not responsible for public health. A psychiatrist taking a patient’s history methodically rules out medical conditions as he goes along, before moving on to the Mental State Examination, so that organic causes are not missed.

Let me briefly clarify what is mental illness:

Take alcohol addiction for example. A psychiatrist obviously evaluates a patient from a medical doctor’s standpoint. For instance, if someone is dependent on alcohol to sleep, I will investigate the cause of insomnia first and not label it alcohol abuse/dependence. Likewise, internet addiction might be the first obvious symptom of OCD. A young patient I recently saw for what his parents called phone addiction turned out to be a case of schizophrenia with comorbid OCD.

Alcohol addiction is considered a chronic, relapsing brain disease, and 50% of vulnerability is apparently due to genes. That still leaves 50% without a genetic cause. This study* by my colleague, Dr Vivek Benegal from NIMHANS, Bangalore, conducted for the government of India in collaboration with the WHO, details drinking patterns, harmful effects and management of alcohol abuse across India.

Compared to 5 years back, there is an increasing availability and greater accessibility to alcohol (“It is much easier to get alcohol than milk!”), greater social acceptance of alcohol use and rampant and visible surrogate advertising (“No advertisement is needed for the sale of alcohol”). Increased prices have not lowered demand (“Now people are consuming more expensive drinks”).

Alcohol use is not considered a liability in relation to work efficiency. Festive drinking – customs (drinking during festivals such as Diwali or Ugadi) and traditions (use of alcohol at times of death, marriage celebrations and birth of children) – is more common than previously reported in India.

Narratives about heavy drinking of free alcohol distributed during elections at local, municipal and national levels were common.

Alcohol is easily available because you can’t ban it any more than you can ban sugar or butter saying they are harmful if abused. People are supposed to use them sparingly. Society as a whole is resigned to taking care of addicts because of addicts’ apparent lack of self-control. We go along with this when patients are brought in for treatment by anxious relatives, even though we know that this usually amounts to management of an episode rather than a permanent change in the patient’s outlook. It’s a Sisyphean task.

Therefore, we focus on assessing suicide risk, managing physical effects like liver damage and vitamin deficiencies, treating depression, and attempting to support and counsel both patient and family. We can’t control the external stressors, the triggers. The multiple hospital admissions of patients who come for rehab have rightly been described as a revolving door pattern.

And there’s this too, from the same study:

Drinking continues to be mostly a solitary, under-socialised affair, mostly after work and outside home, and 50% of income is spent on alcohol.

The greater role of alcohol in domestic violence was recognised universally as also creating public nuisance:

“After drinking he purposely fights for small issues and behaves violently with family and others”; “After drinks, who is wife and who is children! They are beaten squarely”.

“My husband is a good person when not drunk but after drinking he will simply fight with me without any reason, scream at children and no more peace in the house”.

“(Husband) often beats children when he is drunk, otherwise he is such a good father”.

I have heard many such stories over the years from a significant number of female patients who present with symptoms of depression. Being married to an abusive alcoholic who is either unemployed or does underpaid freelance work makes them feel helpless. The cause of his problem ­– on the face of it – is unemployment, financial distress and lack of an education that could have led to a job. The root cause, however, could be genetics, his personality, priorities of his family of origin, or current circumstances. It’s hard to say whether it’s a mental illness, or lack of mental health. The poor wives accept it as kismet or karma.

As a doctor what is my role when an index patient is not sick? I wouldn’t prescribe an antidepressant for the wife as it makes no sense to pump chemicals into someone whose problem is somebody else! She needs support from some agency that doesn’t exist, and she needs her husband to be rehabilitated by a system that is either inadequate or doesn’t exist. I continue to be available and hope it helps.

If every departure from what is regarded as normal behaviour is given a clinical diagnosis the meaning of ‘mental illness’ will be diluted even more than it already is. While I accept that we are often the first point of contact for anyone in mental distress, I don’t think every patient who consults us has psychiatric problems.

According to the WHO, mental health is a state of well-being in which the individual realises his or her own abilities, can cope with the normal stresses of life, can work productively and fruitfully, and is able to make a contribution to his or her community.

When there aren’t enough decent schools, colleges or jobs for people to realise their potential, when there are daily stresses like dense traffic, polluted air, flooded roads, unsafe sidewalks, a pervasive culture of bribery and rudeness, when you can’t work productively because, say, the internet keeps going off . . . you can’t have mental health. Of course, you can look at the positives, count your blessings and all the rest of the things that whatsapp forwards fervently propagate, but are they the real deal?

The long-term solution for meeting the mental health needs of a population does not actually lie in creating armies of psychologists, counsellors, life coaches, help lines, gatekeepers and what have you. I think the rot in society has spread far and deep, and the established systems that used to make people feel secure have been torn away, leaving them vulnerable.

Mental health is a public health concern, the health of entire communities. There’s a crying need for an overhaul of our national priorities. There’s only so much that individual psychiatrists can do because public mental health depends on government policies and a culture that makes it possible for people to have satisfying lives.

Removing roadblocks like the widespread corruption in our country ought to be the first step to achieving national mental health, not increasing the number of psychiatrists! This is the province of Applied Sociology or some other discipline, not Psychiatry.

As things stand, however, we need all hands on deck. Just as some of us need an accountant to help with our taxes, others need help in sorting themselves and their relationships out. People can’t always dig themselves out of holes they have fallen into, so someone has to hand them the tools. So we psychiatrists will continue to see anyone in mental distress. And concerned, empathic, people are welcome to help. Counsellors in India come from all backgrounds and, often, no particular qualification is needed as shown by these women in Tamil Nadu. 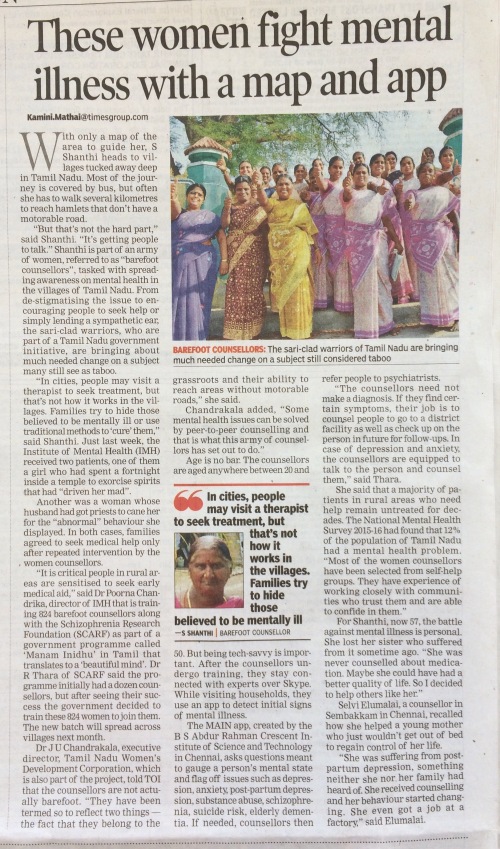 3 thoughts on “a sisyphean task”