This is my third visit to Singapore and Singa-poh getting better only lah!

Gardens by the Bay is a new addition to Singapore’s tourist attractions that has come up after my last visit. It was worth spending an afternoon seeing all those beautiful flowers in the giant greenhouse designed by someone who genuinely cares about plants: Tan Wee Kiat, who stepped down from the post of CEO ten days ago, but will fortunately continue as adviser.

It was the Chinese new year and there was the dragon dance, the light-and-sound show and all the other festivities associated with it in the evening. The place was jampacked with both locals and bus loads of tourists. 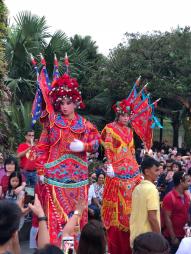 Another day, my husband and I went on a 10km hike through the McRitchie Reservoir trail. It was mostly in the shade, but not dense, because it’s a secondary forest that has sprung up on previously-farmed land. It was surprisingly similar to the part of the Appalachian trail hike we had been on in 2014 at the Delaware Gap in New Jersey. We saw an iguana up close a couple of times, an adult-sized one that silently slunk away, and a young, smaller one that hadn’t perfected her camouflage skills yet.

There was one tree called the Terap that I found interesting because the leaves it produces when it’s young are so different from those it produces when fully grown. The young tree has large lobed, flamboyant leaves that look free and happy, while the adult tree sports small, sedate leaves of a conventional shape. Just like the difference between the imagination of small children and us adults, I thought.

Singapore does care about it’s trees, plants, animals and insects. On our way back we dropped in at the tiny butterfly park in the airport and managed to see a few that hadn’t yet snuggled under leaves to rest, though it was late by butterfly standards as per the notices in the park that said they would be active only between 10:00 am and 4:00 pm.